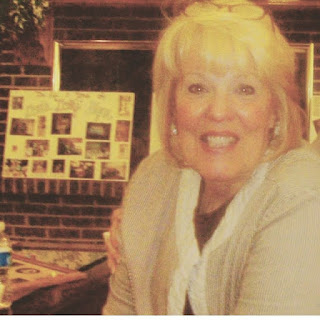 As my mother lay dying at the hospital she had previously worked at for years, I was intrigued to see who came to visit her. It wasn't the higher level executives that she had faithfully served for years, often times befriending them and attending their dinner parties and things.  No, the people that knocked on her door and stood somberly by her bedside were the cleaning crew, the former foreign exchange med students my mom had welcomed into her home and our family, the security guards, and techs from this hospital. They often stood there quietly, some with tears in their eyes, and told who ever was there that my mom was special. She was kind. She looked out for them and always gave them little "surprises." (my mom gave little tiny weirdo gifts of candy and trinkets to me all the time. It was the kind of thing you received in the mail or in person and were like WHAT? but its the kind of thing now I miss receiving. I guess I wasn't the only one she handed these out to.) I appreciate and was reminded that so many things that I value in life was learned from watching my mom. She celebrated people, esp people that others might overlook. One specific man who had a long Polish name I do not remember, my mom called him Lubo, told a story about how my mom helped him work through a language barrier to get administrative tasks done. It was this story and a few others that birthed this dawning realization that my passion to care for and action alongside of people that feel frustrated and alone, or that society doesn't have time for, is from the Lord. However, it was a gift He gave to my mother first and she taught it to me. It was just a widening view of who I am and how exactly I came to be this way. It was an encouragement that although my mom might not have known God the exact same way that I came to know him, He held her and walked with her.

My mom went to Catholic Church every Sunday. I can't say that she possessed a faith that I understand. I know she trusted God, and I know she talked to him a lot. I know she knew where to take the desires of her heart. But, she also was a single mom with two (1 difficult=me) girls to raise in a harsh world where she wasn't afforded the luxury of a college education or much financial resources. There was never enough; time, money, grace, comfort, relaxation, understanding. She did her best and her weariness showed through a lot of the time, but she never quit, she never gave up, she never threw the towel in and I don't think she ever felt sorry for herself. Her fierceness to get through this life gave us an edge, and that is a double edged sword itself. I have found in life that often times society decry's a feisty, fiery, steely woman - but very few are willing to discuss and ammend the difficult life situations that result in the need for that caliber of woman for survival.
Very. Few.

A few months before she passed away, my mom changed in lots of ways. One of the ways was that she said she started to see the Lord more clearly. She was brought to tears by this realization of him. He became huge to her. I passed on Chris Tomlin's music to her during this time and she enjoyed Our God is An Awesome God. She used the word Awesome to describe God a lot after that. One day she sent me this video about Laminin (google it) and she was so comforted by the Lord and further proof of his existence.
(I don't care how you feel about Laminin, or Louie Giglio, or any of that. Just so we are clear, before you send me a message)
We prayed together, I gave her a big print bible and I felt I began to be comforted that she knew the Lord in a way that I understood. That last part of the sentence is really important and I don't want to gloss over it. So many times we want people to have a relationship with God that we approve of, understand, agree with, can quanitify, etc and its ridiculous and arrogant and diminishes God.

While my mom and I had taken communion together many times at her churches over the years, it didn't feel meaningful. Maybe because I wasn't a Christian yet and it didn't mean anything to me. Well, my mom's hospital room was full constantly that week and a half she laid there. Her husband, my sister and I, her husband's brothers and sisters, my aunts, my grandma, a girl from Thailand that adopted my mom as her own, friends and former co-workers and lots of nurses and doctors. But one day, it was just my mom and I in the middle of the day. It was quiet. The door opened and there stood a pastor/priest/whoever. He walked in and asked if we would like communion. This was the final sacrament, last rites, for my mother. My mom nodded yes and thus ensued the most powerful breaking of the bread I have ever had. Anytime I doubt if the Lord loves me, I recall this moment. This is my stone of remembrance in my heart.  I can stand solidly on this gift amidst the trembling, mind shattering grief of the departure of my only parent in such a dramatic and rapid way. Many, almost all, of my family do not share my faith in Jesus. I might have felt awkward leaning into this special moment in their presence. The Lord orchestrated a set aside time when everyone else had somewhere else to be, and then sent in someone to deliver us a final meal with the Lord on this side of Heaven.

The Lord's grace was heavy with me in another way during her death. I was not there the moment that she died. I was there every other day during the day. **This was only by the grace of my ministry co-workers - specifically my boss, Joel - who took time every day out of his/their schedules to drive me the over an hour commute to the hospital where my mother was. I was completely unable to handle that drive myself. Joel, his wife Paula or one of my other friends, would drive me and then sit at the end of the hallway working remotely while I visited for hours with my mom. Then, they would drive me all the way home. This was a daily thing for almost two weeks. Ill never be able to repay that debt, or explain/understand that grace.

But the day my mom died, she was being moved from the hospital. For many reasons, her husband decided to not bring her home to their house but to move her to his sisters house. His sister has a beautiful house with phenomenal finished basement that had a huge sliding glass door overlooking the sunshine filled green yard. My mother would be able to have her hospital bed there in front of the floor to ceiling window/door. There were plans to bring her dogs there with her.

That day, no one was able to drive me out there until the afternoon, so I sat home and stared at the third Harry Potter movie for awhile. Then went for an anxious walk around the block to pass the time. Meanwhile, as the ambulance arrived at the house with my mother in the back, our whole family and her husband's whole family emptied out to welcome her into the house.
Minus me = now about 2 hours away in the city.
This loving crowd of people walked alongside my mother as the EMT's wheeled the bed into the house and carried her down the stairs. As they placed her in front of the glass door, everyone circled around her and clapped - welcoming her "home."
She smiled and clapped too.
And then she died. Right there, mid-clap.
She died celebrating. She died smiling, She died looking at her family on their feet and applauding her.

And its perfect because if anyone's life deserves a frickin standing ovation -  it's hers.

And God's grace was there because Im pretty sure if I stood there among the crowd and watched her ease back into the pillows and lose color after her last breath here on earth with me,  I wouldn't have been able to keep clapping and smiling and easing her out of this life. 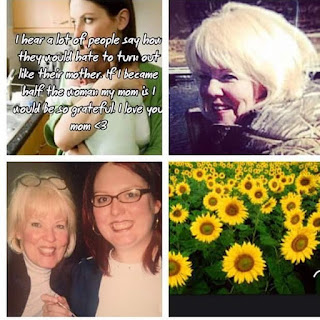 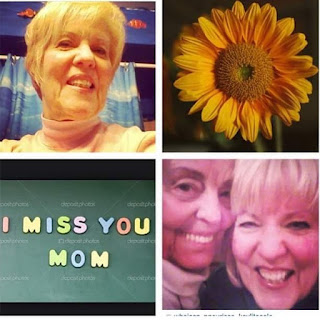 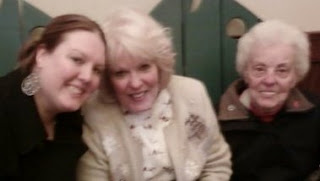 Take out the trash.

April 28, 2017
There were many painful and awkward situations which led me to a somewhat early awareness of race and class. One of my favorite authors/speakers, Dr. Cornell West once said "People wake up at different times" in reference to (white) people coming to an awareness of race and class issues, and Im thankful that I had a somewhat early awakening in life. My earliest lessons on all things race and class were fostered by my mother, not in a higher education theoretical framework understanding kind of way- but by a real life, single mother, strong as steel but teachable, white woman in the city with interracial friendships and relationships kinda way. Its better, trust me. Real Life is a way better and more dependable classroom. School also was a huge component in how I have come to understand issues of whiteness and its inherent privilege, and all things race and class based. For high school, my mother, sister and I moved into a close neighboring suburb of Chicago. I could t
Read more