June 12, 2017
When we moved here, we moved to a neighborhood called Ardmore. It was wonderful and we had the most neighborly neighbors we have ever experienced in our life. They brought us food and cards to welcome us and then again to comfort us as MJ fell ill. They decorated our house with Christmas lights when we couldn't go back to Chicago for Christmas last year because of MJ's surgery, and others shared red wine with me when we got back from Duke.

This neighborhood was a grace for our first year as it was around the corner from our church, down the street from the hospital (where we didn't yet know that we would be spending lots of time) and the houses were close together reminiscent of city life. It was close to downtown W-S and filled with tons of parks to walk in and play at.

Our part of the neighborhood was incredibly hilly. It was all but unwalkable for me and my bad ankles/bad knees and recent post-baby body. The way the street planning worked out left us with a double lot for a yard. It was enormous and long and sloping downhill. Four other houses bordered our backyard. Two of them had confederate flags, one HUGE and Fluttering and flapped over our yard if the wind was blowing right.  Really the other is barely worth mentioning as it was so small and mostly hidden in their overgrown backyard--but I still saw it. Anyway, we had this beautiful grand window in our dining room that looked over our expansive yard with its multitude of southern flowering bushes, huge leafy trees, MJs baby swing, and some elusive sprouts of grass. All that nature was rejuvenative and life giving for a city girl from the south side of Chicago but what always caught our eye was the BIG, RED, CONFEDERATE FLAG. The red screamed out among all the green accents. In winter, its colorful prominence was amplified in the few light snow dustings or just in the bleakness of the season. To the credit and pleasure of Ardmore it is important to note that upon our arrival in the neighborhood from Chicago, we did have two sets of neighbors come by almost immediately to welcome us that did also sorrowfully reference that neighbor and apologize for him and his enormous flag. "We noticed your Illinois license plates. Welcome to the south, He doesn't represent us," the one couple said several times. They called him "the rebel" and it stuck in our household too.

I remember feeling scared. Everything was so new here in the south,  but this neighbor raised the culture shock ante 7 times for sure. And he was really close, geographically speaking. Was this neighborhood we just moved into safe for my Black husband and bi-racial child to live in? How would this man feel when he noticed his new neighbors were not as Lilly white as the rest of our block/neighborhood? What exactly was In that little backyard house that the flag so prominently adorned in the backyard?

Our dining room table was set up against that window and countless meal times that flag stole my eyes and my peace. Mj's too, apparently. Flag was one of his first words and Ive haven't told anyone till now that it was mostly because of that stupid flag in our backyard. I literally turned his swingset around so he would stop pointing at it.  Mike and I had many conversations about it. Mike had a quiet exasperation with it and I would catch him sighing or shaking his head angrily while looking out the window. However, always the less gracious one, I hatched grand plans to defy that neighbors and remove their flag. I looked up Black Lives Matter flags and poles and wanted to get one and attach it to our fence bordering his property and fly it just a few inches above his confederate flag. I contemplated even getting a Union flag and doing the same. After watching Hunger Games one evening on Redbox, I told Mike I could strategically shoot flaming arrows into the flag. Mike vetoed all my genius ideas and said that you don't fight fire with fire, or hate with hate. Good thing I married him.

I was sure God was on our side when a big storm blew through and a tree crashed down and snapped the flag pole in half and shredded his flag. I was all pentecostal, raising my hands and dancing around the house triumphantly proclaiming "Vengeance is mine says the Lord!"  Well, the storm was on my side - but FedEx and Amazon were on his because the next day we watched him get an early morning delivery and waste no time climbing a ladder to install a new flag pole and another confederate flag. The real rub was that since this flag was brand spanking new it was brighter red and blue and white than the previous one.

Jesus won my heart many times, and I even told friends I was going to go make friends with him by making a pie (no, I don't really make pies). I recalled the command and repented of my failure to love my neighbor. On other days, I thought about praying for him since I felt he was my enemy.

When Murray ran away several times in our first few months here, he ended up at this neighbors house. Murray found a loose edge of the fence in the corner of the yard that connected with this guy's property and he exploited it by escaping and touring the neighborhood like a furry jerk. One time, his girlfriend tied a large rope around Murrays neck and brought my beloved dog back to me. Another time after walking up and down the blocks wearing my baby on my back, I finally saw Murray in his backyard and watched him yelling about it as I stood hesitantly at the far end of his driveway which was lined in Trump signs and Police Lives Matter signs. The red flag flying large as a backdrop over it all. His big wide gate was open and Murray saw me and came running out to me. I just turned and took my dog and my baby and myself home quickly and he scruffily yelled something about controlling my dog as I departed without a look backwards.

We moved after a year and a half there. A year and a half and I never plucked up the courage to go talk to him.
Would it have changed anything?
If I had said,
"HI....we are your new neighbors. The confederate flag scares us. To us, and everyone we know, it means you don't like black people. It means that you wish the south won the war, and that would mean very different things for all the people who aren't white. That flag means hate to us. I don't want that flag flapping over the side of our yard, stealing our peace as we eat as a proud interracial family and look over the abundant greenery in our yard. I don't want my son to grow up playing under the flag that represented a group of people who believed that using and abusing humans as property and money was acceptable and even, biblical? Could you take it down? Would you take it down? In the name of neighborly peace, would you take down this symbol that you like because it makes me cry? Would you take down that flag that makes my husband fume with righteous anger at the seemingly unrepentant history of our country that robbed him of the legacy of his ancestor's African freedom?"

Would it have mattered? Would it have changed him, or I?
I didn't have the courage to go over there and speak those words. I stood behind the tall wooden fence he built and hated him underneath his billowing, blowing, bleeding red confederate flag and in that I failed too. 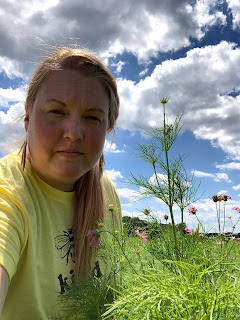